For any self-professed democracy Indian media is way too controlled. But make no mistake. It is not a freedom forcefully taken. It is a freedom which is willfully surrendered. Former BJP chief and former Indian Deputy Prime Minister L. K. Advani has said on record to the media: “You were asked only to bend, but you crawled.” The censorship part came much later. It all began with self-censorship and it all began in Kashmir. India’s current ruling elite might have perfected the art of torture and destruction in the occupied state, but it began with its secular elite, it began with the Nehruvian dynasty. The media was always complicit. And it was never out of patriotism. It was always out of a pathological fear of Kashmiris and India’s non-Hindu minorities. Even the house-trained Muslim seculars played a part in this colonization of the body, mind and soul. If India reaps thistles of discord, division, degeneracy and bigotry, they were happily sown in Kashmir, in the full sight of a client media with journalists and media pundits constantly cheering on.

The story of censorship in Kashmir is of special importance because it is a growing disease. From Kashmir it has spread to entire India and from India through some in the Indian diaspora to the entire world. In this fast-paced, high tech and knowledge economy driven world, an exceptional amount of effort is put into ensuring that the shrieks of oppressed Kashmiris do not escape the world’s largest open-air prison. Take for instance the first five years of the Modi government. Throughout its first term in office, the Modi government encouraged the Indian occupying forces and client police to use pellet guns to attack the unarmed civilians, blinding many, including young children. But if you went to the image section of Google and searched Kashmir the pictures you saw were of natural beauty, of abundance, of happiness. You had to further narrow the parameters and type “Kashmir blind” to see some of those harrowing pictures that depict the reality of the state of Kashmiris. Visit the site today and repeat the search and you will see that it brings back less distressing and more sanitized pictures. India’s Pavlovian grip on big tech companies, sometimes through its embeds in the diaspora, sometimes through the lure of big contracts in India, is complete. Google is not only headed by a man born and raised in India; its content moderation wing also has a disproportionate number of Indians working there. The issue is not of the Indian expatriates working anywhere, it is of a class of individuals at the beck and call of the Indian deep state and a search algorithm that is often accused of being tampered with. And this disease is not just limited to Google alone. Most big tech companies and some of the international media outlets have sold their souls to the devil for peanuts.

But let us return to how the Indian media covers Kashmir, how the Indian government controls and manipulates the media including social media in the state. Kashmir erupted under the first Modi government when the Indian forces killed Burhan Wani, a young, charismatic freedom fighter who had mastered the art of communication through social media. As protests broke out in the state, the Indian government and its proxies in Srinagar lost their nerve and clamped down on whatever semblance of media freedom had still survived. They called it an ‘information blockade’. It is worth noting here that India’s craven media had presented Wani’s murder in the broad daylight as the patriotic government’s action against yet another terrorist. Any separatist or freedom fighter is invariably presented in that light by the media. The fact that there is no record of any violent activity directly linked to him and his activism might have been solely limited to his social media advocacy or sentimental video speeches was of little importance to the manic jingoism of the Indian outlets. Nuances matter little when decades of conditioning and regimentation of minds kicks in. Anyone asking for their rights is represented by the Indian channels and papers as the enemy of peace, of the people and of democracy and human rights.  While Kashmiri media treads carefully in the face of manifest threat posed by the occupying forces, it was after a long time that the Indian state decided to ban media outlets and the internet. The ban on newspapers lasted for a week, on the internet for five months and was in essence a full-dress rehearsal of what was soon to come. The occupying forces invaded newspaper offices and seized copies and equipment.  When, following the Uri incident, the Indian forces staged the drama of a surgical strike against Pakistan, the Indian media and even their entertainment industry legitimized the unfounded claims. The fact that the footage of the claimed action was hard to come by did not deter either media pundits from claiming victory and burnishing the muscular image of the Modi government or the Indian culture industry from glorifying the purported action through dramatization. The internet ban comes handy in spreading these lies across the occupied state. In April 2017 the Indian government further perfected the art of censorship by blocking social media sites and apps in one go. The new ban blocked access to Facebook, Twitter, WhatsApp, WeChat, Skype, Pinterest, Vine and Snapchat in the name of countering the propaganda of anti-national elements. The real reason was to stop the oppressed Kashmiris from sending pictures of Indian atrocities abroad. The pictures of blinded children and wounded citizens that somehow managed to get across would be stymied by India’s mighty soft power and clout abroad. News and information portals like Free Press Kashmir which still had presence on Facebook were censored through the site’s reporting abuse mechanism and the company’s corporate interests in the country. The picture of an unarmed Kashmiri voter strapped to the hood of a military jeep would barely make it to the wide world. The lawbreaking officer Major Leetul Gogoi was later commended as a great patriot and national hero.

It is worth pointing out here that during the 2019 elections, Indian media played the role of canvassers for the Modi government. Seizing on the opportunity provided by the Pulwama incident, the media whipped up the war rhetoric and on-screen shouting anchors and pundits contributed to the jingoistic war frenzy. But there was little critical thinking on display. Nuances were not important. It mattered little that the whole incident could be an inside job. Baying for Pakistani blood was important to help Modi win a second term. And the crawling, craven media went along. Then the accidental brinkmanship in Balakot was presented as the great war maneuver. With little to show for, the fiction of 350 dead was invented. And even when an Indian pilot was captured by Pakistan, the Indian media was adamant that its forces had downed a Pakistani F-16. This claim still persists despite almost universal evidence to the contrary. The Indian media is not in a mental space to accept its lies or to confess its wrongdoings. This will prove far more devastating for India than Kashmir.
There is a method to this madness. When Kashmiri journalist Shujaat Bukhari was killed, Indian media would blame dissident Kashmiris for the murder. And yet the pattern is quite similar to the broad daylight murder of Indian dissidents in mainland India. The supporters of India’s Hindutva government keep killing its citizens and Kashmiris out in the open and yet the blame is shifted to someone else. Recently, when the

Indian forces shot down an elderly man who was accompanied by his grandson and the picture of a terrified toddler sitting atop the dead body of his grandfather emerged, Indian media was quick to spin the yarn that the murder was a result of separatist fire not that of authorities. But that is not the story that the child immediately told. Since there was evidence of abuse of power, the story was soon buried deep and forgotten. On August 5, 2019 the myth of democracy, autonomy and free speech in Indian Illegally Occupied Jammu and Kashmir was pulverized by the unilateral, unwarranted, unsolicited and unconstitutional decision of the Indian government to abolish Article 370, 35-A. Triggered by the Trump administration’s offer of mediation and the possibility of its muscular image slipping, the Modi government moved quickly to dismantle the very foundation on which its entire Kashmir case rested. In the Indian illegally occupied state of Jammu and Kashmir whose faux autonomy was abolished through a quasi-constitutional maneuver, the land was bifurcated and newly minted union territories by the name of Jammu and Kashmir and Ladakh were attached to the center. With this came unprecedented repression. Just before this legal fiction, the Indian government had further bolstered its position by flying in further forces; fundamental rights were indefinitely suspended; all mainstream political leadership was put under house arrest; and an airtight curfew and a media and internet ban was imposed. Since then, the Indian government and its direct proxies have claimed that they are relaxing these measures but there has been little proof of that. This erosion of fundamental rights, oppression and unending saga of brutal abuse is regularly hidden from the world through draconian and praetorian means. Even when the Indian authorities claimed they had restored internet in the Valley, the speed was marginal and people were asked to give an undertaking that they would use neither VPN nor social media through proxies. The social media ban continues. And even though initially the international media with the help of Indian journalists working for foreign outlets managed to cover this story for a small interval, the global Indian clout and its embeds around the world soon stymied the flow of information. As a result, Kashmir keeps suffering silently at the hands of its oppressors. Meanwhile, this perverse trend is now rewriting India’s very genetic code and the country is becoming a proto-fascist polity. The gag order for Kashmir has ensured that the Indian media, Indian parliament and Indian courts all fall in line. Their expediency and tolerance of oppression in Kashmir is now weaponized against India itself. The devil’s bargain is complete and the devil has come to collect the soul of the Indian democracy. 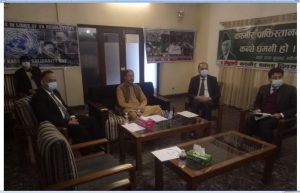 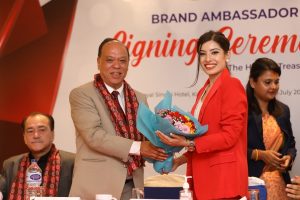 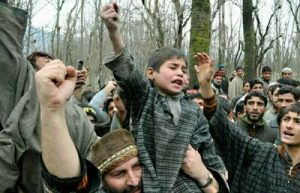